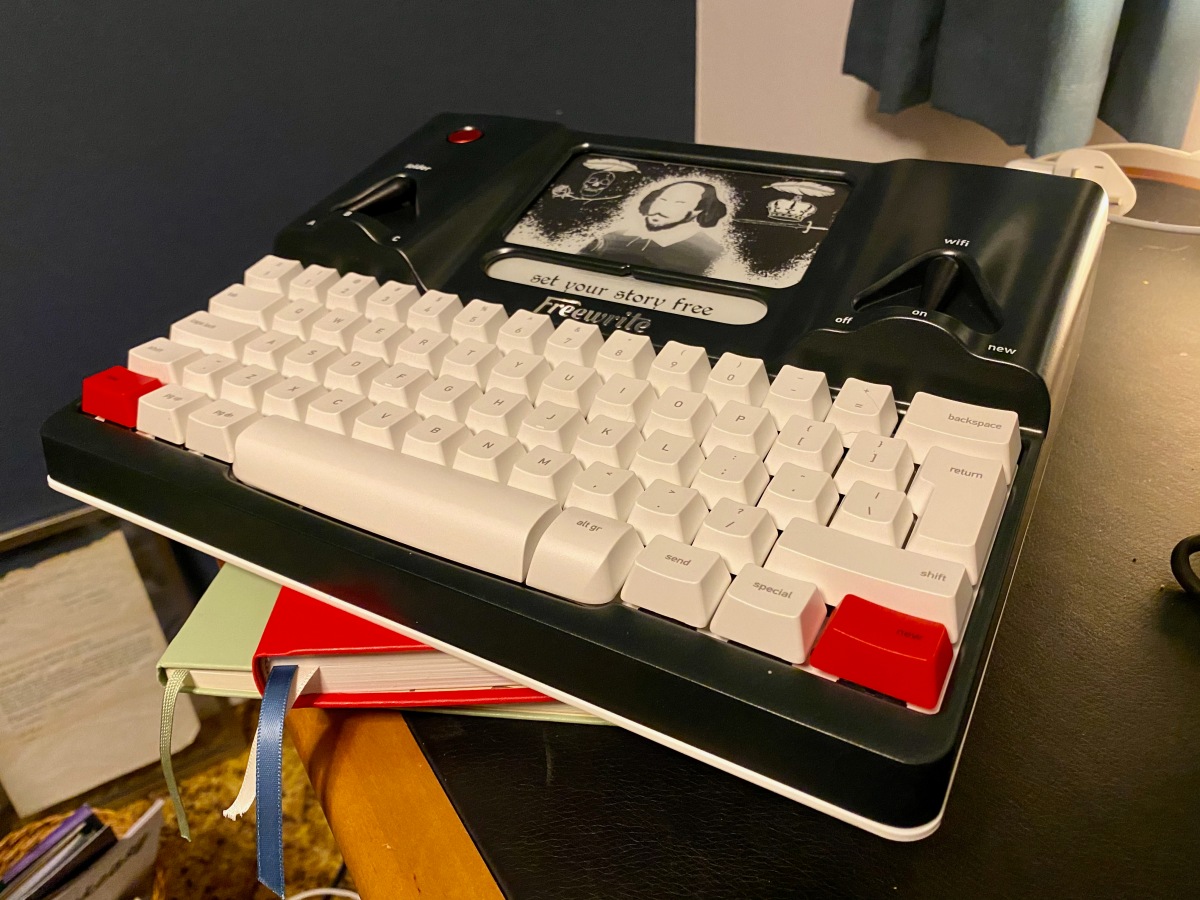 For anyone that has spent the last 20 years or so typing on ever less satisfying keyboards, writing with the Astrohaus Freewrite is a strange experience. In fact, in some ways it is profoundly disconcerting. Going back to a normal computer keyboard and regular large screen is like emerging from a wilderness retreat.

Like a wilderness retreat, the Freewrite is an attempt to regain some simplicity and with it that often talked of but little understood condition of flow. Flow has attained almost mystical status in the productivity and artistic communities as a kind of meditative state in which, thanks to an extreme of focus, the words just come. In an age when your phone goes ping and there’s an incoming message request every few seconds from one or more demanding social networks, flow is power.

So, how does this relate to the chunky little box on which I’m typing this draft? It helps at this point to describe what the Freewrite is and what it’s intended to do. Launched in 2017 by a small company called Astrohaus, Freewrite is a combination of excellent mechanical keyboard and e-ink screen, all in a box which looks like a steampunk typewriter. You type, words appear on screen. That, in a nutshell is what Freewrite is and does.

Compared to any computer you’re likely to use daily the Freewrite is an absolute chonk. It weighs around four pounds and the case is made from some kind of metal — probably aluminium but whatever it is it’s substantial. The base is plastic with a slightly grippy feel, which obviously ensures it firmly stays even on your expensive executive glass meeting room table, Mr Hipster Executive.

Everything about this machine is designed to look and feel analogue. The switches which allow you to change which folder you’re writing in and turn Wi-Fi on and off are big, mechanical beasts rather than wimpy little buttons. The power switch is a red button with a satisfying push to it.

Then, of course, there is the keyboard. It’s mechanical and uses Cherry MX Brown switches. For those relatively new to technical switches, the Brown switch is often favoured as it has a relatively short depth of travel before the key is activated, but then an extended depression which gives it a satisfying thunk if you bottom it out. In other words, you can go relatively gently on it and be about as quiet as a mechanical keyboard can get, or you can hammer it a little harder and thunk to your heart’s content. Because the activation depth is relatively short, if you are coming from a normal computer keyboard it will not feel like you have to do insane finger workouts before you can actually type anything at speed.

Just as importantly, like all quality keyboards (and like no laptop keyboards) this is raked at an angle, which gives your hands a more comfortable position and lets them travel across the board a little faster. Once you get used to it, don’t be surprised if your typing speed goes up, but do be prepared to make many errors in the meantime. If, like me, you have typed millions of words on laptop keyboards and just got used to them, it will take a while to adjust. But it’s worth it in the end. Your hands and your typing speed will thank you.

The screen on the Freewrite is a pair of e-ink panels. The top one, which is about the size of a small smartphone, is where your words appear as you type. As you would expect from an e-ink screen it is a little laggy, but not dramatically so. There’s a backlight for typing in dimmer conditions, or you can turn that light off and it’s perfectly readable in almost every light.

The second screen just underneath serves as an information panel, giving you useful information like a word count, a timer, or a couple of different kinds of clock. I suspect that for me this will stay on the word count permanently. I don’t often need a timer, and annoyingly the timer isn’t persistent. If the company upgrades the software, I would love to see an information panel which combines word count and timer, which I think would be the most useful option of all.

While I was finishing off that sentence I heard the “bong” of Outlook demanding my attention on my laptop and quickly had to break to answer an email. And I instantly realised that this keyboard is going to spoil my experience of my lovely new MacBook Pro unless I get an external Cherry MX Brown keyboard to go with it. The feeling is that different, and even now I can tell it’s that much better. Which leaves me wondering why I resisted getting into mechanical keyboards for this long?

In line with the rest of the device the software on the Freewrite is minimal. In fact, there really isn’t anything which anyone raised typing on computers would recognise as software. There are no apps. You just type, and words appear on the screen. That’s it.

You have three folders to store files in and you access them not through a fancy touch screen but by moving a mechanical switch. You turn it off and get a screensaver. Turn it on and you are back where you left off in whatever document you’re working on. There’s no spell check, no grammar checker, nothing which could potentially get between you and writing.

This is because, unlike most devices, the Freewrite is opinionated about the way you should work. Computers, particularly modern ones, are built on the principle that the user is always right, at least about the way they want to work. Don’t like this word processor? Fine! Use this other one instead! Like to write and edit as you go along? Word will let you do that all day long, with its squiggly red lines and attention-grabbing autocorrects.

The Freewrite does not care about your approach. It is built for one approach and one only: you draft, by writing in an uninterrupted way as possible. Then you use another tool to edit and turn your steam of consciousness and raw words into something polished.

Freewrite has absolutely no aspirations to be a device that you edit on. It lacks every editing capability except for a backspace key to get rid of that typo in the previous word. There are no arrow keys. Although you can page up and page down if you want to look back into your text, there’s no cursor that you can more anywhere backwards.

Like I said, the Freewrite has an opinion about the way you should write, and if you don’t like that opinion you should go somewhere else.

However, the Freewrite does have another trick up its sleeve: it does everything possible to make sure that you can get your words into another tool for editing which suits you.

On the back of the Freewrite is a USB Type-C port which you can use for charging the device, or for connecting it to a computer and pulling files off it. However, remember that Wi-Fi switch? It’s there to connect you with Postbox, which is Astrohaus’ cloud sync service. When connected to Wi-Fi every thirty seconds or so Freewrite connects to Postbox and syncs the latest version of your document to the cloud. From there, you can sync it to Google Drive or Dropbox, and these synced versions are in Word format. This means you can seamlessly move from drafting with the Freewrite to editing in Word, with all its excellent editing features.

There’s just one caveat: it’s not really sync as you normally understand it. Although Postbox includes a capable little distraction-free writer called Sprinter, changes you make in Sprinter are not synced back to the Freewrite. In fact, if you open a Freewrite-originated document in Sprinter it moves it to a different folder which the Freewrite can’t even access, and removes it from your device.

This is a bit of a shame. It’s not that I want to get into a cycle of drafting then editing on the Mac then back to the Freewrite, but there are times when an idea appears while I’m in front of the Mac and I would like to jot it down quickly there and then and expand it later on the Freewrite. But I can’t — yet. There have been some murmurings that it might be possible in the future to edit and roundtrip documents to and from the Freewrite through Sprinter, but it’s not there yet, and if that feature never comes along at all, I won’t be crying over it.

When my friend, colleague and now published author Thomas McMullan reviewed the Freewrite a few years ago, he concluded with this:

It is easy to write the Freewrite off as an expensive oddity, angled to nostalgic retirees and well-heeled posers, but it shows that the progress of writing technology doesn’t need to travel in a straight line. With its USB Type-C port and automatic cloud syncing, the Freewrite doesn’t ignore internet connectivity, but instead keeps it under tight control. It shows an alternate path, perhaps into a cul-de-sac, where typing doesn’t happen across 20 tabs.

Other critics gave the device a lot of stick, arguing it was a bit of a hipster toy, but I think Tom was on to something. There is a lot more to the Freewrite. Or rather: there is a lot less to it. It is devoted to one task and one task alone: hammering out a first rough draft of whatever you’re writing. I wrote the first draft of this review on the Freewrite and the experience of it was excellent. Not the experience of the device: the device just got out of the way. What was delightful was the experience of the writing itself. I don’t think I have actually enjoyed the physicality of writing quite so much for years.

In and hour and a half, I’ve written as little over 1800 words on the Freewrite and I have experienced a sense of flow while I’ve been doing it. That is well worth the money this machine cost. Now you’ll have to excuse me — I’m off to order a decent keyboard for the Mac too.

This site uses Akismet to reduce spam. Learn how your comment data is processed.